Hollywood is throwing around its weight to tip the scales in Joe Biden’s favor.

Celebrities are using their platforms to prod fans to go to the polls and vote against Donald Trump.

But Trump got a surprising celebrity endorsement after one huge Biden blunder.

The Democrats’ mask is being pulled back and more people are waking up to their lies.

While Hollywood celebrities are literally shedding their clothes to help Joe Biden win, a brave bunch are actually risking their careers to back Donald Trump.

Rapper, actor, and television producer Curtis Jackson, who is best known by his stage name 50 Cent, posted a screen capture on Instagram from CNBC’s “Power Lunch.”

The graphic showed the top tax rates in blue havens like New York City and California. 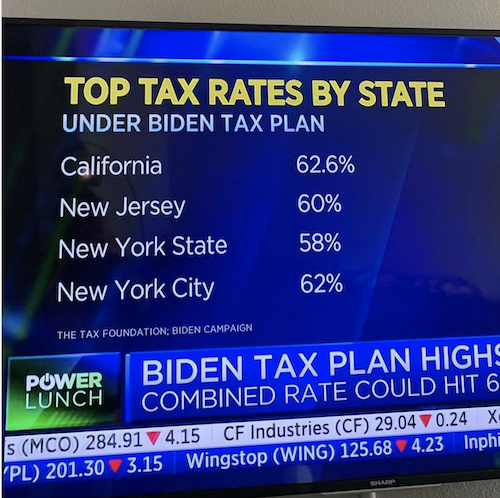 Jackson, a Queens native and New York resident, posted the following caption under the picture:

“WHAT THE F–K! (VOTE ForTRUMP) IM OUT…F–K NEW YORK The KNICKS never win anyway. I don’t care Trump doesn’t like black people 62% are you out of ya f–king mind.”

First of all, Jackson’s assertion that Trump doesn’t like black people is preposterous, but importantly, even someone who isn’t particularly fond of Trump has no choice but to vote for him after realizing how insane the Democrats have become.

The top tax rate of 62% in New York is beyond the pale for Jackson, and certainly other New Yorkers feel the same.

That doesn’t even include hidden taxes such as the sales tax.

Jackson was keen enough to link the terrible policies with the Democrat Party.

Many celebrities are incapable of doing that.

For example, singer and actress Cher has a severe case of Trump Derangement Syndrome, but she unwittingly echoed his immigration policy when there was talk that asylum seekers from Mexico and Central America could be relocated away from border towns in South Texas to “sanctuary” cities like Los Angeles.

Cher balked at the proposal and said that Los Angeles had enough problems without thousands of migrants coming in.

Twitter followers had to remind her that she was on the side of sky-high taxes.

Jackson faced backlash from the left, but he stuck to his guns and doubled down on his antipathy to the Democrats’ insane tax plan.

If the Democrats truly could, they would go even higher.

Bernie Sanders and other Democrats have openly talked about the 91% top tax rates of the 1950s (that nobody actually paid).

Democrats think they can soak the rich forever, but eventually people like 50 Cent will refuse to pay and move to a red state or leave the country entirely.

More people need to do what Jackson did and understand the negative impact Democrat policies actually have on their lives.