Radical leftists have invaded the world of sports.

A clear manifestation of that reality was the anti-American national anthem protests.

And an anthem protester just disgraced America again with one sentence.

Ever since former NFL quarterback Colin Kaepernick ignited the anti-American anthem protests, copycats in other sports have picked up his radical left-wing cause.

The first to kneel in solidarity with him was U.S. Women’s National Soccer Team member Megan Rapinoe.

And one of the most recent was U.S. Olympic hammer thrower Gwen Berry.

During Olympic trials, Berry covered her face during the playing of the Star-Spangled Banner. 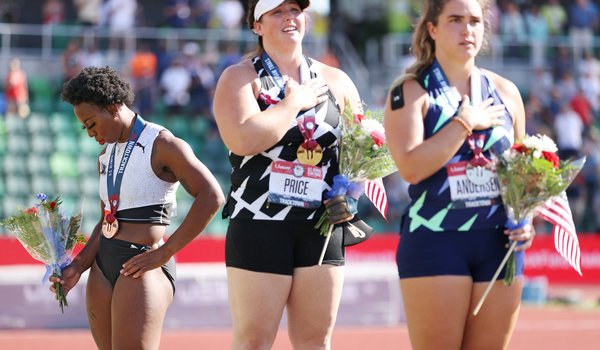 Berry offered as an explanation for her disrespectful act:

“I feel like it was a setup, and they did it on purpose…I was pissed, to be honest…It was real disrespectful…I didn’t really want to be up there. Like I said, it was a setup. I was hot.”

Berry also vowed to protest at the Olympics if she won, but she didn’t even come close to medaling.

Now Berry is doubling down on her anti-American rhetoric.

Writing in the Players Tribune Blog, Berry said of the anthem:

“This song doesn’t speak for me. This anthem doesn’t represent me. It’s hypocritical. I decided I was going to be true to myself. I wasn’t going to respect something that disrespects people who look like me.”

However, before kneeling for the anthem was en vogue, Berry literally used to wrap herself in the flag and show appreciation for her country.

But Kaepernick made hatred for America stylish for a new generation.

The corporate press pretends that Kaepernick is this generation’s Muhammad Ali, but Ali’s reward for protesting the draft during the Vietnam War was not endorsement deals with Coca-Cola and IBM.

Dumping on America has become a cottage industry, and Berry is attempting to cash in.

Worse yet, the press is eating it all up.

Berry appeared on numerous so-called mainstream media outlets to air out her grievances with the country.

She added in her blog:

“If you think those fears aren’t justified, if you still can’t see how Black lives are being targeted, then we obviously live in two separate Americas, or you’re willingly blind. I had to use my platform to speak on these issues because it doesn’t matter if I’m a two-time Olympian. It doesn’t matter that I’ve represented my country on international stages. My country has shown me time and time again that it doesn’t give a damn about my son. And it doesn’t give a damn about me.”

Berry’s paranoid delusions and lack of gratitude exemplify what has gone wrong in the country.

She lives in a country where she has been able to achieve success and notoriety for hammer-throwing.

Billions across the world would die trying to get to this country, and many of them tragically do.

But narcissists like Berry want more than freedom and opportunity.