Alec Baldwin is the last person who should be lecturing anyone about guns.

His reckless behavior while filming a movie led to the death of a woman.

And Baldwin said something about guns that will have you seeing red.

Baldwin allegedly pulled the trigger during a rehearsal for the scene, and he was shocked to find out the gun was loaded.

Baldwin claimed he didn’t know the gun was loaded, and novice armorer Hannah Gutierrez-Reed said she was too distracted by having to do too many jobs to oversee all of the guns; several crew members had walked off the production due to unsafe conditions.

Not only was Baldwin a producer on the film, but the gun was in his hand, so ultimately he was responsible for proper gun safety.

But Baldwin has been busy deflecting blame.

He even told reporters that he’s on board with limiting the use of guns on film sets.

“I do know that an ongoing effort to limit the use of firearms on film sets is something I’m extremely interested in…We have to realize that when it does go wrong, and it’s this horrible catastrophic thing, some new measures have to take place.”

What happened on Rust is incredibly rare, and was easily avoidable if proper safety protocols and gun discipline had been followed.

There was no reason to point a gun at anyone, and certainly not the cinematographer and director during a rehearsal.

And as a producer on the film, Baldwin should’ve made sure that gun procedures were enacted.

He did neither, and he’s trying to shift blame.

Baldwin even retweeted an article that absolved him of responsibility. 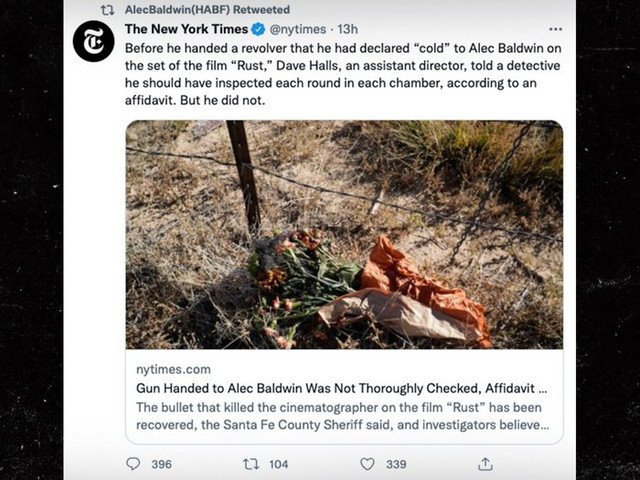 Baldwin is an outspoken liberal who routinely mocks the Right, and has pushed for gun control measures in the past.

Baldwin will undoubtedly use this tragedy to push for more gun regulation as he attempts to weasel out of criminal prosecution.

Apparently the film cut all kinds of corners—including not fully insured—so a lot of questions still need to be answered.

The corporate press has largely attempted to protect Baldwin, just as they did when his wife Hilaria got caught faking a Spanish accent to appear more exotic.

The director, assistant director, and armorer have all been targeted by the press more than Baldwin.

That isn’t to say they bear no responsibility, but Baldwin’s role in the killing is conspicuously being downplayed by the so-called mainstream media.

The gun control sucker punch is coming, and Baldwin will dutifully fall in line.

But the main takeaway from this tragedy is that reckless behavior can lead to horrific outcomes.

There’s too much focus on guns, and too little focus on the people using them irresponsibly.