The NBA is in serious trouble.

And as the face of the NBA, LeBron James has overseen the league’s popularity decline.

LeBron James made the decision to get political after he witnessed Colin Kaepernick receive praise from the corporate press for his anti-American anthem protest.

Since then, James has also engaged in seething anti-police rhetoric, even suggesting that officers wake up with the intent of killing black people.

James crossed a line when he tweeted a threat at a police officer who saved a young woman’s life, and the NBA’s favorability is rapidly declining as its stars get more political.

And a new study shows that James is now the most hated player in the league.

“A new social media study finds that LeBron James is the most hated player in the NBA by a fairly significant margin. According to the social media use survey by Sports Insider using trends software with direct access to geotagged Twitter data, the study tracked negative mentions of NBA players on Twitter.”

This is in stark contrast to Michael Jordan, who helped the game grow to an international level.

As the league’s steward, James has alienated fans with his wild anti-police and anti-American protests.

“The data was then grouped by region and measured against which players received the most negative tweets across a map of states. James won it, going away with 24 states lining up against him. However, Kyrie Irving factored in second place, with 18 states hating him the most. 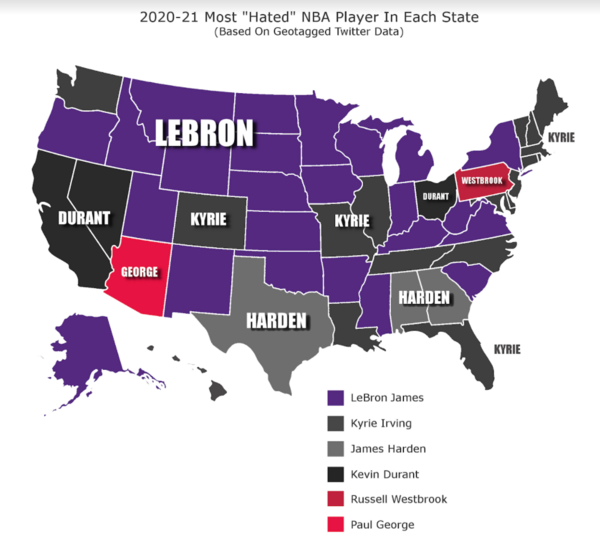 There was a clear shift in James’s behavior after the Left turned Kaepernick into a modern-day Muhammad Ali, who protested the Vietnam War at the height of his fame.

In a 2015 interview with The Hollywood Reporter, James said he gave his son Bronny “the talk” about how to interact with the police.

“The talk is, ‘You be respectful, you do what’s asked, and you let them do their job, and we’ll take care of the rest after. You don’t have to boast and brag and automatically think it’s us against the police’…I’ve had one or two encounters with the police in my life that were nothing. But sometimes, you just got to shut up. It’s that simple. Just be quiet and let them do their job and go on about your life, and hopefully, things go well.”

So James gave his son sage advice while stoking rage and fear across the country.

It’s amazing how James switched his entire tone in one short year.

The NBA is bleeding viewers, and James’s unpopularity is one reason why.

People are tired of his act.