Americans will be subjected to endless movies and television series about how terrible Donald Trump was.

But one unhinged director said something about Donald Trump he’ll regret.

Hollywood celebrities show no signs of tempering their hatred of Donald Trump.

One of the most Trump-deranged figures in the entertainment industry is director Spike Lee.

Not only has Lee attacked Trump, but he’s also ridiculed black Trump supporters in the most despicable way.

During an awards speech, Lee made the hackneyed and pathetic comparison between Trump and Hitler:

“We’re at the crossroads now. And everyone please be safe. This is not a game. These people got guns with ammunition…This president, President Agent Orange, will go down in history with the likes of Hitler. These guys, all his boys, they are going down on the wrong side of history.”

Not only is Lee’s statement stupid, but it also doesn’t reflect well on him when he’s been photographed with Trump multiple times. 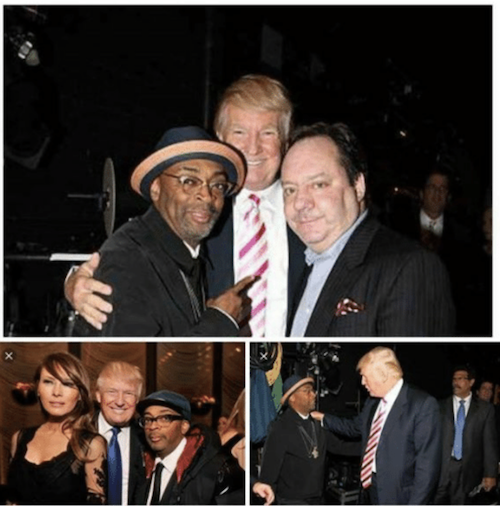 Lee and other prominent Democrats were friends with Trump for years.

He did not become “Hitler” until he decided to run for president as a Republican; the Democrats have smeared every single Republican presidential candidate since Richard Nixon as a Nazi.

It doesn’t matter that Trump has Jewish grandchildren, moved the American embassy to Jerusalem, brokered peace deals between Israel and Muslim-majority states, and has a town named after him in Israel.

Trump is still a Nazi in the eyes of the left.

Yet Trump got the highest GOP share of the nonwhite vote since 1960, much to the consternation of Barack Obama and other Democrats.

Considering Trump was supposed to be such a power-hungry authoritarian, he devolved power from the executive branch, obeyed court orders, didn’t send in federal troops to quell nationwide riots, and didn’t use COVID-19 as an excuse to seize power when even some Democrats were urging him to do so.

Lee and other Hollywood leftists can pretend Trump was an evil dictator, but the facts don’t bear that out.

It won’t stop them from making insipid propaganda films and shows about him, but the American people have less trust in the Democrat Media Complex than ever before.

The public saw the machine’s mask slip over the past four years with big tech censorship and nonsensical COVID policies.

For example, big box stores and casinos were allowed to open while small businesses were forced to shut down.

Pro-lockdown protests were excoriated by the press, but thousands marching shoulder to shoulder in the streets for Black Lives Matter  was endorsed by the media and the corrupted scientific establishment.

The left’s tools of propaganda are weaker than they have ever been, which is why censorship is ramping up.

Lee’s fiery but empty words will not reach beyond his left-wing echo chamber.