Unhinged Hollywood celebrities are still grappling with their hatred of Donald Trump.

Joe Biden’s entrance into the White House has done little to quell their rage.

But one Trump-deranged actress made an eye-opening statement about COVID-19.

The Democrat Media Complex has worked incredibly hard to blame Donald Trump for a global pandemic that originated in Wuhan, China.

Nancy Pelosi even suggested COVID should be called the “Trump virus.”

But most people aren’t ignoring the fact that the virus came from China and the CCP has a lot to answer for.

Even Trump-hating actress and singer Bette Midler had the good sense to state the obvious about China’s complicity in the worldwide pandemic. 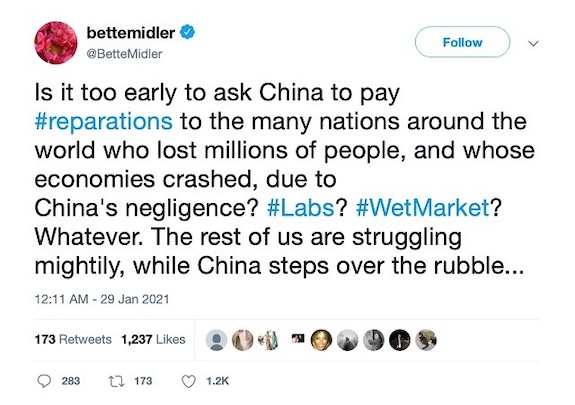 She later deleted the tweet, but that doesn’t take back her sentiment.

Midler even pointed out how the virus might’ve come from the level-four biohazard lab of virology in Wuhan, and not the wet market that didn’t even sell bats.

Senator Tom Cotton was excoriated by the so-called mainstream media for simply asking questions about the origin of the Wuhan virus when the facts were still in dispute.

The American press’s hatred of Trump allowed the Chinese Communist Party to pull off one of the most galling propaganda campaigns in recent memory.

They forwarded the narrative that it was “racist” to note that the virus originated in China even though viruses have been linked to their place of origin for over a century.

Suddenly it became verboten to say “Wuhan virus” despite the fact one reporter after another called it the “Wuhan coronavirus” for months.

China knows that America’s culture war is always ripe for exploitation, and the corporate press took the bait.

China’s culpability was no longer the subject as countries around the world are literally in flames.

European countries are on the brink of collapse in light of the draconian COVID lockdowns.

America hasn’t quite reached the boiling point of some European nations, but the U.S. isn’t far behind.

As Midler pointed out in her tweet, China is stepping “over the rubble” while other economies are in a tailspin.

China actually grew its economy while lying about the virus, deceiving the World Health Organization, pumping out propaganda, and hoarding personal protective equipment.

China has also denied access to its Wuhan lab, so the other countries of the world may never get the entire truth about China’s role in the calamity.

Needless to say, there should be a reckoning for what China did.

COVID-19 should at least serve as a warning that it’s no longer prudent to depend on China so heavily for critical drug and material manufacturing.

America’s over-reliance on being a consumer economy reared its ugly head during the outset of the pandemic.

The United States was depending on a bellicose foreign power for vital equipment.

If a Trump-deranged progressive like Bette Midler can see the problem, the average American sees it as well.