Hollywood celebrities love nothing more than to virtue-signal.

They spent the past five years slinging the most vile insults at Donald Trump and other Republicans.

But one of Trump’s biggest celebrity critics got hit with troubling allegations.

Chrissy Teigen and her husband John Legend have been two of the most hateful Hollywood critics of Donald Trump.

Both are raging leftists who have ardently supported limitless abortion, open borders, and other radical policies.

Stodden infamously married actor Doug Hutchison in 2011 when he was 50 years old, and she was only 16.

“[Chrissy] wouldn’t just publicly tweet about wanting me to take ‘a dirt nap’ but would privately DM me and tell me to kill myself.” https://t.co/wFerfaSwCK

Stodden even accused Teigen of sending her direct messages that told her to commit suicide, though she did not release the  messages publicly.

After the allegations blew up, Teigen issued the following apology:

“Not a lot of people are lucky enough to be held accountable for all their past (expletive) in front of the entire world. I’m mortified and sad at who I used to be. I was an insecure, attention seeking troll.”

“All of me wants to believe this is a sincere apology, but it feels like a public attempt to save her partnerships with Target and other brands who are realizing her ‘wokeness’ is a broken record.”

Some of Teigen’s “jokes” included: 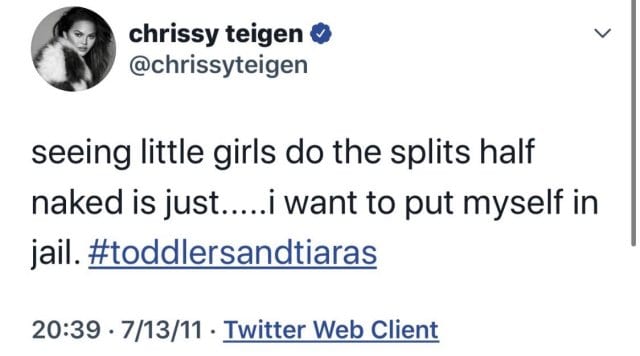 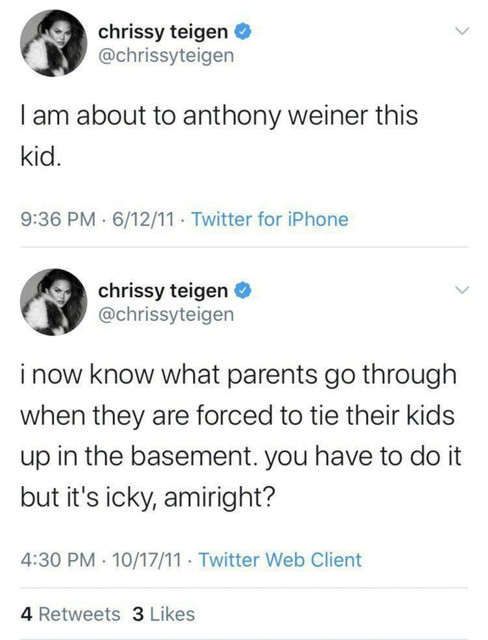 Teigen also deleted tweets where she attacked then-9-year-old actress Quvenzhané Wallis in 2013 after she was nominated for an Oscar for her role in Beasts of the Southern Wild.

Teigen said, “Is it okay to call a small child cocky? I am forced to like Quvenzhané Wallis because she’s a child right? Okay fine.”

Teigen has positioned herself as a “woke” princess, but her nastiness is coming back to bite her.

Many of the purveyors of cancel culture are some of its biggest offenders.

But since Teigen is part of the in-crowd, she won’t receive any real punishment.

0 0
Previous ArticleColin Kaepernick Is Publishing One Book That Will Turn Your Stomach
Next ArticleOne NFL Player Is Under Fire For Calling Out Dr. Fauci’s Lies