Many brands are facing the problem of “get woke, go broke.”

Companies that try to shove a progressive message down their customers’ throats usually end up suffering.

And one company is facing a boycott after endorsing an anthem-protesting athlete.

And Megan Rapinoe—the first professional athlete to kneel in support of Colin Kaepernick after he launched the anti-American anthem protests in the NFL—has become the face of the team.

Rapinoe was tapped to be an “angel” for the newly branded “woke” Victoria’s Secret.

But her endorsement deal with Subway is causing a stir.

It turns out that many Subway franchises have complained to national headquarters about customers vowing to boycott the sandwich shop until Rapinoe’s ads are pulled. 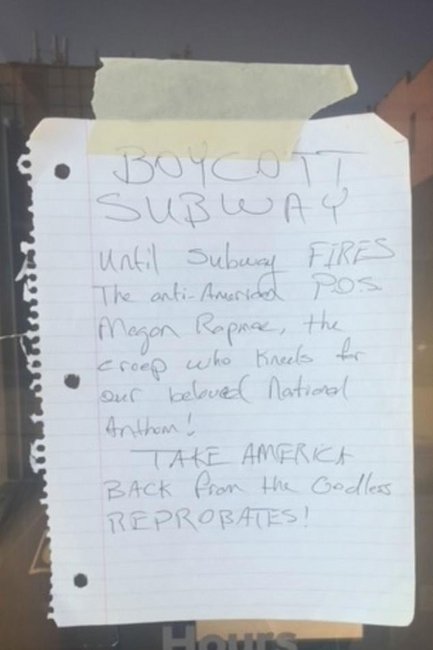 The note reads: “BOYCOTT SUBWAY until Subway fires the anti-American POS Megan Rapinoe, the creep who kneels for our beloved national anthem! Take back America from the godless reprobates!”

The owner of the Wisconsin franchise that received the angry note said, “The ad should be pulled and done with. It gets tiring apologizing.”

It turns out that people don’t want to support and enrich an athlete that hates the country and shows so little gratitude.

Rapinoe and other members of the team also perpetuated the myth of the gender pay gap.

In reality, the team cut a deal that they were happy with at the time, but it turned out that they left money on the table.

An Arizona Subway owner wrote on the North American Association of Subway Franchisees (NAASF) blog, “Spending our money to make a political statement is completely and totally out of bounds.”

It appears that the customers agree.

The Women’s National Team reopened wounds when they took a knee before their 3-0 loss to Sweden in the Olympics.

The anti-American protests have spiraled out of control over the past five years.

They have led to a wave of resentment toward the country that has manifested itself in ugly ways.

Leftists cheered on the carnage that led to billions of property damage and dozens of deaths.

Rapinoe and other “woke” athletes have spurred protests while cutting ads for Subway to line their pockets.

Kaepernick himself has racked up impressive deals with Disney, Netflix, and Nike to name a few companies.

As the Subway backlash has shown, people do not want to support ungrateful athletes who show disdain for the country.