The NFL has been ruined by politics.

Even the national anthem has become a divisive subject within the league.

Now one NFL star could be forced to retire for one jaw-dropping reason.

The effects of the Wuhan virus are still being felt.

Many states are again flirting with mask mandates and even lockdowns.

But the main focus of health experts is to get everyone vaccinated.

However, Dr. Anthony Fauci and other public health officials promoting COVID-19 vaccination have run into a roadblock: people aren’t taking it.

After an intense vaccination push, only about 49.2% of the population is vaccinated.

And the hesitancy over vaccines is now playing out on the big stage of the NFL.

Arizona Cardinals star wide receiver DeAndre Hopkins, who’s on track for the Hall of Fame, expressed dismay over potentially having to walk away from the game over the league’s vaccine mandate. 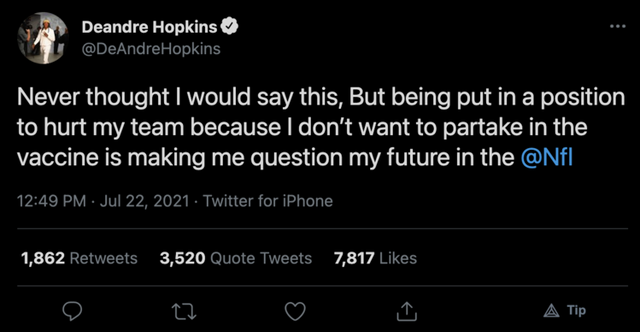 Hopkins deleted the tweet after a deluge of attacks from vaccine Karens, but followed up with a tweet that simply said, “Freedom?”

Hopkins isn’t alone in his hesitancy over the vaccine.

Buffalo Bills wide receiver Cole Beasley said he would not take the vaccine, and got bombarded with hate.

Tampa Bay Buccaneers running back Leonard Fournette also said he would not get the jab.

When Dallas Cowboys star quarterback Dak Prescott was asked about his vaccine status, he opted not to answer.

Dallas Cowboys QB Dak Prescott on whether or not he is vaccinated: “I don’t necessarily think that’s exactly important … I think that’s HIPAA.”

(It is not HIPAA, which prohibits health professionals from revealing your medical records.) pic.twitter.com/TgKajt4eng

It’s absurd that NFL players are being asked about their vaccine status, and some are being forced to contemplate retirement.

The hesitancy among NFL players also destroys the narrative that only white Fox News watchers are reluctant to take the vaccine.

Black Americans are currently the least likely demographic to get the vaccine.

Many people have their reasons for vaccine skepticism.

First, the survival rate for COVID-19 is approximately 99.8%, and it’s even higher for elite professional athletes in tip-top shape.

Second, vaccine injury does occur, although it is rare statistically.

It stands to reason that a professional athlete would rather risk getting COVID than putting an experimental drug with no longitudinal study into his body.

The NFL has a big problem on its hands.

If the top players refuse to get vaccinated and teams are forced to forfeit games due to COVID, the chasm is only going to get worse.