Controversy continues to circle over the NFL.

Fans are no longer allowed to enjoy sports without politics seeping in.

And one NFL player is accused of doing something that will infuriate Joe Biden.

Tampa Bay Buccaneers wide receiver Antonio Brown has been put in the crosshairs of the COVID regime.

Brown, who goes by the nickname AB, was forced to miss a game because he tested positive for COVID.

But news broke of something Brown allegedly did that would enrage Joe Biden and the COVID regime.

Brown allegedly tried to procure a fake vaccine card in order to avoid getting the jab.

From the Tampa Bay Times:

Bucs receiver Antonio Brown obtained a fake COVID-19 vaccination card so he could avoid NFL protocols, according to his former live-in chef.

Brown’s girlfriend, model Cydney Moreau, told Los Angeles chef Steven Ruiz in a text message July 2 that Brown was willing to pay $500 if he could get a Johnson & Johnson vaccination card.

“Can you get the COVID cards?” Moreau texted Ruiz on July 2, according to a screen grab he provided to the Tampa Bay Times.

“I can try,” Ruiz responded. 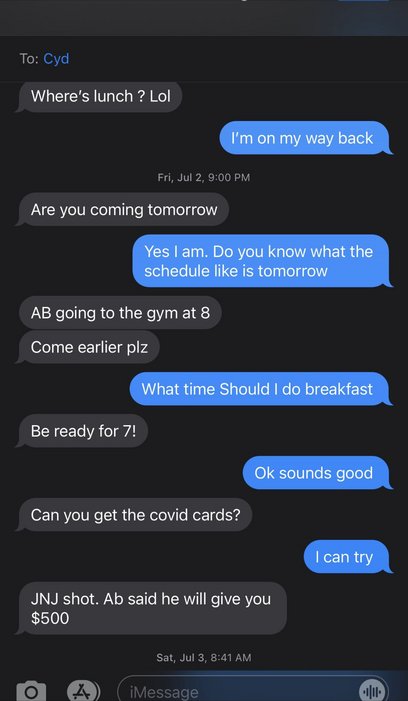 Brown supposedly wanted the J&J vaccine because it was single-dose and would require less paperwork.

These are the conditions that have been set up by the COVID regime.

Professional athletes in peak health are being forced to take experimental injections regardless of their individual health status.

Superstar quarterback Aaron Rodgers was recently put through the wringer after it was revealed he pursued homeopathic immunization because he was allergic to the Pfizer and Moderna vaccines, and the Johnson & Johnson vaccine had its FDA approval temporarily suspended.

Ruiz said he was unable back in July to find a fake vaccination card for Brown, who had told those around him that he was worried about the vaccine’s potential negative effects on his body. A few weeks later, however, Ruiz said Brown showed him fake vaccination cards, which the wide receiver told Ruiz he had purchased for himself and Moreau. They were sitting on Brown’s dining room table, Ruiz said. It was just days before the start of Bucs training camp.

Whether or not Brown got a fake vaccine card, the story illustrates that Biden’s plan to coerce all Americans into getting the jab is not working.

The result has been a two-tiered society that’s as divided as ever, and people are doing everything they can to skirt the “rules.”

Instead of course-correcting, the COVID regime is doubling down on the tyranny.

Vaccine boosters have been approved, and Dr. Anthony Fauci admitted that the next step is to vaccinate babies.

The madness has to stop, but it won’t until enough Americans resist the indulgences of the COVID regime.