Joe Biden and the COVID regime are itching to lock down the country again.

But more and more prominent Americans are beginning to ask questions about mandates and other extreme measures.

Now LeBron James made one statement that has Biden nervous.

Los Angeles Lakers superstar LeBron James has been a dutiful spokesman for the D.C. establishment.

He parrots all of the talking points of the Left, and he is rewarded with fawning media coverage.

However, James lately has been asking questions about the COVID regime that are raising eyebrows.

In response to the hysteria over the Omicron variant, James posted to Instagram the viral Spider-Man meme used to show that two or more things are identical.

In James’s post, he compared COVID to the flu and the common cold. 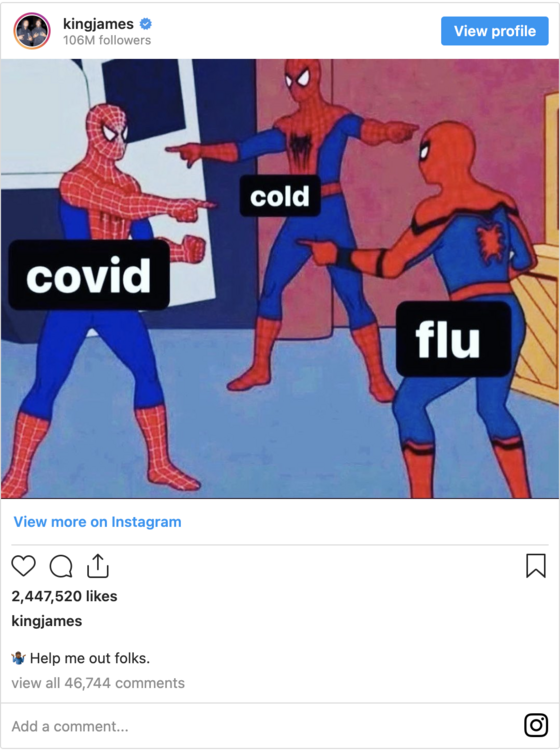 This is considered verboten.

In fact, people have been banned from social media for suggesting that COVID is analogous to the flu.

But James is too big to cancel.

The COVID regime has to be worried that his message went out to his 106 million followers.

Fellow NBA stars Trae Young, Miles Bridges, and others commented on the post and had similar sentiments.

All available data show that Omicron is much milder than other variants, but the hysteria has almost been even more over-the-top.

The NBA even flirted with going back to “the Bubble” playoff run of 2020 that took place at Disney World in Orlando.

Some have referred to the new variant as “Omicold” because the symptoms are almost indistinguishable from a bad cold, but that hasn’t stopped Biden, Dr. Anthony Fauci, and other public health officials to call for more crackdowns.

This isn’t the first time James has raised questions about COVID.

He recently commented on the nonsensical mask theater at his son’s high school basketball game.

I’m sorry but I’m at my boys game and the mask underneath the chin makes ZERO sense to me!!

James also called into question the testing protocols for COVID when he received a false positive for the virus.

He would have been forced to sit out ten days if his results had not come back as a false positive.

The NBA’s testing regimen is grinding a promising season to a halt.

Several games have already been postponed because vaccinated, asymptomatic players have been held out of action.

Very little of what the COVID regime is doing makes sense, and James is the latest celebrity to call it out.