LeBron James Endangered One Police Officer With A Disgusting Threat

Professional sports are dying a slow death because of politics.

Many of the top stars have decided to get on their soapboxes and rant on topics they don’t fully understand.

The NBA’s ratings are tanking.

League commissioner Adam Silver promised to scale back from the full-on Black Lives Matter propaganda that marred the 2020 playoffs.

But star players like LeBron James didn’t get the message that partisan politics is killing the sport.

A police officer shot and killed Bryant as she was lunging with a knife in her hand toward another teenage girl.

Bodycam footage of the incident was released, but James didn’t even bother to gather the facts before tweeting a threat at the officer who saved a teenage girl’s life.

James tweeted a picture of the officer with the menacing caption, “You’re next”: 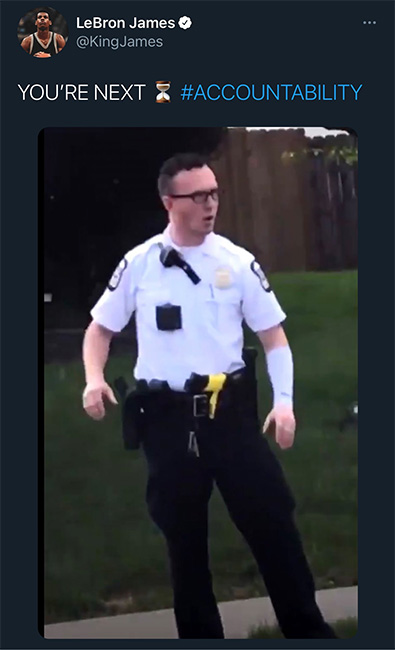 He later issued a mealy-mouthed non-apology:

ANGER does any of us any good and that includes myself! Gathering all the facts and educating does though! My anger still is here for what happened that lil girl. My sympathy for her family and may justice prevail! 🙏🏾✊🏾🤎👑

James’s threat comes on the heels of the verdict in the Derek Chauvin trial.

Chauvin was convicted on all three counts—including second-degree murder—in the death of George Floyd.

Legal experts argued that second and third-degree murder charges did not fit the crime because of a lack of intent, but it didn’t matter.

James’s behavior is indicative of celebrities and so-called mainstream media outlets that are poisoning the national discourse.

These lies about police shootings have real-world consequences.

In 2020, James made several despicable statements about policing in America.

He said black men are being “hunted” on a daily basis by cops, even though there’s zero evidence to support the claim.

James also said racist cops wake up in the morning with the intent of killing unarmed black men.

But after two police officers were ambushed in their police car in Los Angeles, James was silent.

James makes most of his money from endorsements, particularly from Nike whose largest customer base resides in China, so he doesn’t really care if the NBA overall takes a financial hit.

He’s nearly a billionaire and he’s in the twilight of his career.

But the long-term health of the NBA is in serious jeopardy because of its foolish embrace of progressive politics.