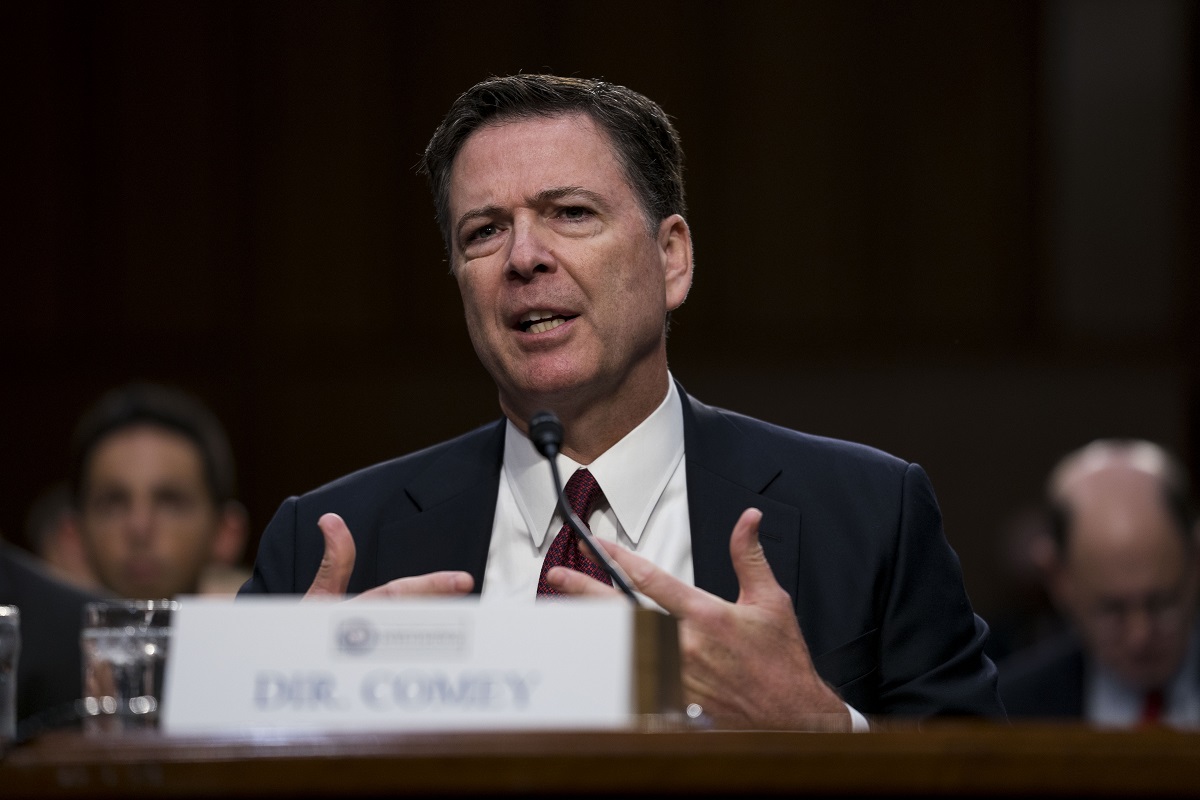 The former top agent pulled off the amazing feat of being despised by both major parties, and embarked on a book tour to rehabilitate his sullied image.

Left-wing shills like Stephen Colbert have been accommodating, but one interviewer pressed him unexpectedly and caught him in a ridiculous lie.

Comey appeared on CNN of all places and got pressed by Jake Tapper on a number of issues. At one point, Comey said his book and subsequent tour were not an attack on the president, which nobody believes for a second.

In a tough interview Thursday on CNN’s ‘The Lead,’ the former FBI director maintained that he did not write his recent book to attack President Trump, and also addressed his memos and Hillary Clinton investigation.

James Comey sat down with CNN’s Jake Tapper on Thursday for a hard-hitting interview centered on the former FBI director’s best-seller A Higher Loyalty and its allegations about President Donald Trump, who served only as a “counterpoint” in the book, Comey maintained, not its subject.

At the outset of the special edition of The Lead With Jake Tapper, Tapper asked Comey about two breaking news stories CNN was reporting: that the Justice Department had submitted a criminal referral on former Deputy FBI Director and Comey colleague Andrew McCabe, and reports that the Department of Justice would soon begin sharing with Congress Comey’s memos of meetings with Trump.

Responding to the news of McCabe’s criminal referral, Comey said that he could “potentially” be a witness to the prosecution if the reporting on the referral were accurate. When asked if he thought reports that the Justice Department would begin sharing memos of his Trump meetings with Congress were “right,” Comey said, “I don’t know, because I don’t know what considerations the department has taken into account. It’s fine by me.” He also specified that there were somewhere between five and 10 memos, and that he couldn’t detail the nature of the classified documents.

Tapper also brought up reporting that Trump believes he has “weathered,” or made it through unscathed, Comey’s book tour. When Tapper asked Comey whether he thought that assessment is accurate, the former FBI director replied, “I have no idea. The book tour’s not about the president, the book’s about … starting a conversation about our values. Trump figures into it.”

Tapper pressed Comey on his response, saying that his encounters with Trump figure in a large part of the book. “I think he is a counterpoint [to the subject of ethical leadership], that’s why he’s in there,” Comey said. “I couldn’t write about ethical leadership without … illustrating someone who I think fails to demonstrate those values.” He refused to answer Tapper’s question of whether Hillary Clinton would have been a better president, and said that he thought Trump was “legitimately elected.”

Tapper also took issue with Comey’s assertion that he didn’t know that Clinton would make a better president, noting that Comey encourages readers of his book to vote. Why ask readers to vote, Tapper asked, if you weren’t implying vote against Trump? Comey responded that he hoped that he wasn’t enjoining readers to vote “against” but rather vote “for” someone whose values reflect one’s own. Comey said he hoped readers would take his prompt as a suggestion to not “shrug” at irregular behavior from a leader “but realize that’s not okay, that’s not normal.”

When asked if he thought painting the book’s portrait of President Trump would sully his brand as a nonpartisan leader with integrity and the FBI’s brand, Comey told Tapper that he hoped not because he wasn’t criticizing Trump for his political views but “on the grounds of values,” which he called “more important than partisan politics.”

Tapper asked if the former FBI director thought the president was a “bully,” given his criticism of bullies in the book. Comey replied that Trump exhibited “bully-like behavior” but that he doesn’t hate, or even dislike, the president.

Comey wants people to believe he doesn’t dislike the president or didn’t conceive his memoir as a hit piece, even though he leaked his memos to a professor at Columbia, and lobbed petty shots at President Trump in his book.

Comey also encouraged people to vote, but not necessarily against Trump, even though he wrote a book about how he believed Trump was morally unfit to be president and said himself he was no longer a Republican.

This interview is simply the latest example of why the former FBI director has earned the moniker “Slippery” James Comey.