And “woke” celebrities ensure that the anti-police rhetoric spreads far and wide.

Now a far-left Hollywood actress said something infuriating about one dead cop.

For example, she supported the communist Sandinistas in Nicaragua in the 1980s, and she hobnobbed with socialist Venezuelan president Hugo Chavez when he was alive.

Now Sarandon is taking a swipe at police officers in New York City.

Violent crime is rising for the first time since it spiked in the early 1990s and tailed off.

And Manhattan DA Alvin Bragg is one of Soros’s latest puppets.

Two police officers were shot and killed during a domestic violence distress call by a repeat offender who should not have been on the street.

Police filled into the streets to show their support for a fallen compatriot, and nasty leftists used the occasion to spew their bile.

And Sarandon retweeted a message of someone captioning the funeral as “fascism.” 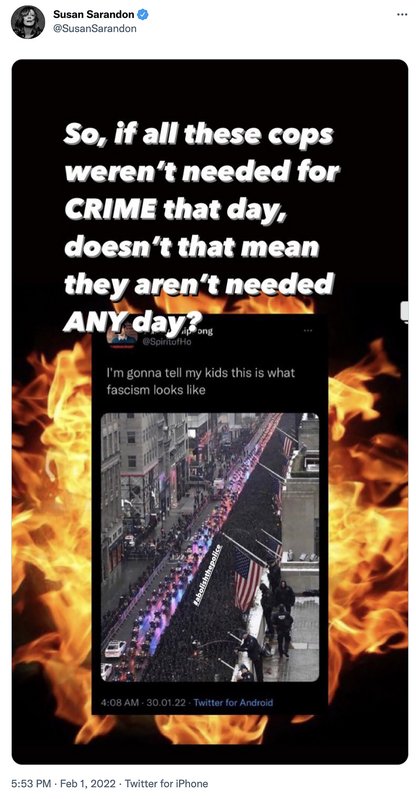 Neither Sarandon nor any other “woke” liberal would have said something similar about George Floyd’s multiple state funerals, including being buried in a gold casket.

Instead the left used Floyd’s death as a pretext to riot and loot and burn down police precincts.

Dominique Luzuriaga, widow of Detective Jason Rivera, one of the murdered officers, called out DA Bragg for the pro-crime policies that contributed to her husband’s death.

She said while giving a heartbreaking eulogy:

The “compassionate” left felt nothing for Luzuriaga or any of the family members who mourned the loss of a loved one.

Leftists only saw an opportunity to push their radical anti-cop rhetoric.

But Hollywood elites like Sarandon are never the ones who face the consequences of “defunding the police” and other ridiculous pro-crime policies.

The people actually in the communities are the ones who bear the brunt of the consequences.

The left spent half of 2020 demonizing police officers, and the results were deadly.

Crime jumped by 30%, the biggest increase in history.

Philadelphia, for example, experienced its two deadliest years in the past 15 years in 2020 and 2021 as the murder rate spiked.

And the Democratic response to the rise in crime is to blame “over-policing.”

Over-policing is not the reason why Americans are getting slaughtered in record numbers.