Liberals are goading more athletes to speak up about politics.

But that’s only if they have the “correct” political perspective.

And a boxing legend was reading one book that made liberals’ heads explode.

Boxing legend Mike Tyson had an eventful trip to the airport.

While he was on an airplane, an intoxicated fan harassed him repeatedly until Tyson finally had enough and struck the man several times.

Fox News reported that “Melvin Townsend III has been convicted of fraud, grand theft, burglary, possession of controlled substances and trafficking in stolen property. The 36-year-old was also incarcerated for 20 months in 2009 and again in 2019 for 15 months.”

But after the incident, Tyson had mellowed out and stunned the left when he was photographed holding a copy of “Basic Economics” by Thomas Sowell.

Sowell has written dozens of books poking holes in common leftist arguments that continually get parroted.

For example, in the early 1980s, Sowell debunked the idea of the gender pay gap.

Sowell dug through Department of Labor statistics and determined that men and women who had spent an equal amount of time in the workforce in the exact same job got paid roughly the same.

In fact, female college graduates make more than their male counterparts in almost every major city when controlled for occupation. 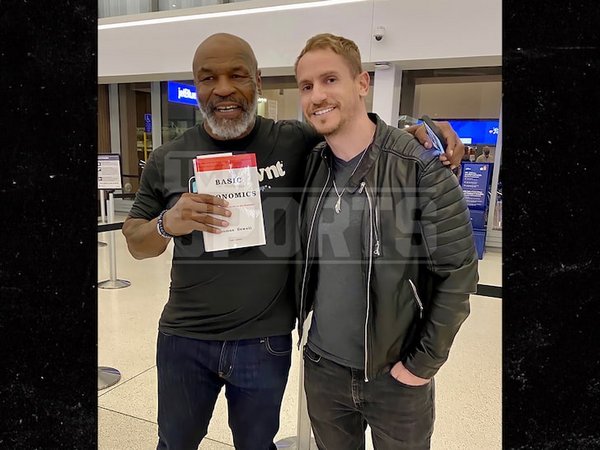 Liberals almost had a heart attack when Green Bay Packers quarterback Aaron Rodgers mentioned that he had Atlas Shrugged by Ayn Rand on his bookshelf.

Leftists have tried to pretend for decades that Sowell essentially does not exist because their rebuttals to his arguments are so weak.

"People say 'you’re a very tough person.' I’m not tough. Life is tough. I’m merely trying to acquaint you with those facts."

The fact that Tyson is promoting the work of Sowell is a good thing.

Sowell has experienced somewhat of a renaissance over the past few years as more people have stumbled onto his writings.

More members of Congress could serve to read Sowell’s work.

That would make it a bit easier to drain the D.C. Swamp.