The Trump-deranged actor recklessly fired a gun that killed a crewmember on a film set.

Now Baldwin said something jaw-dropping to excuse the horrible thing he did.

Alec Baldwin’s career is in jeopardy after he ended a woman’s life during filming on the western Rust.

Baldwin allegedly fired the gun at cinematographer Halyna Hutchins and director Joel Souza during a rehearsal, and he was stunned to learn that the gun was loaded with real bullets.

A gun loaded with real bullets on a film shoot is gross negligence on multiple fronts.

Baldwin starred in and produced the movie, and he pointed the gun at a target he was not intending to shoot—a huge firearm taboo—so the ultimate responsibility lies with him.

But Baldwin is doing everything to deflect blame from himself.

He recently said he was interested in banning real guns from movie shoots, and now he says a police officer should be on every set to prevent such tragic mistakes. 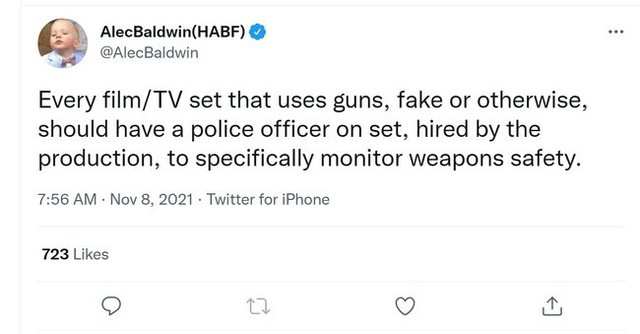 First, Baldwin “protected” his tweets, which means only people he allows can see what he’s saying on social media.

Second, requiring a police officer to be on set makes no sense because that’s the job of the gun armorer.

“A police officer might have a lot of experience with his service revolver and some other firearms but an armorer is experienced in all firearms and specially trained to handle, clean, operate, repair, and instruct on those firearms.”

The problem with Baldwin the producer is that he chose to hire an inexperienced gun armorer who was in over her head.

“Let’s not forget that until last month, despite countless movie and television shows featuring millions of rounds of gunfire, no one has been killed by a misfire since actor Brandon Lee 28 whole years ago. In other words, the safety protocols involving guns on movie and television productions work perfect—if they’re followed. Unfortunately, the protocols were not observed on the set of Rust, and now a young woman is dead.”

Democrats are trying to use the tragedy to push gun control legislation, but more procedures won’t make one bit of difference if they’re not followed, as was the case on the set of Rust.

The bottom line is that the people in charge of the film acted irresponsibly.

In fact, prior to the tragic shooting, several crewmembers walked off the production due to safety concerns.

Apparently there had been a couple of misfires earlier in the production.

One misfire should have shut down production until all safety protocols were followed.

But Baldwin and the other people in charge cut corners.

Gun safety measures are in place for a reason.