Hollywood has long been known for its depravity.

The #MeToo Movement wrecked the careers of a few degenerate actors and producers.

But one actor ruined by an ugly sex scandal is making a jaw-dropping comeback.

Actor Anthony Rapp and many other men accused Spacey of sexual misconduct.

Spacey tried to save his career by coming out as gay and making plea as a liberal-in-good-standing.

Ridley Scott even reshot “All the Money in the World” with actor Christopher Plummer replacing Spacey.

“Spacey, 61, has faced multiple accusations of sexual misconduct in recent years. In 2017, 20 young men accused the two-time Oscar-winner of sexual misconduct during his time at the Old Vic Theatre in London between 1995 and 2013. Following the allegations, Spacey was dropped from his role as President Frank Underwood in the popular Netflix series ‘House of Cards.’ He was also edited out of Ridley Scott’s 2017 film ‘All the Money in the World,’ which at the time had finished production. Reshoots were ordered and Spacey was replaced by Christopher Plummer.”

But after languishing on the sidelines, Spacey released a bizarre video where he behaved like his character Frank Underwood in the Netflix series “House of Cards.”

Spacey even ominously said, “We’re not done, no matter what anyone says.”

Spacey proved to be prescient because he was cast in the Italian film “The Man Who Drew God” despite some of his accusers turning up dead. 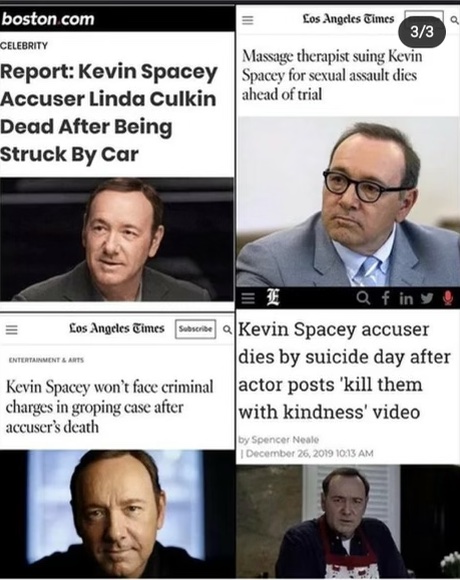 What’s even more galling is that “The Man Who Drew God” is about a man who’s falsely accused of being a pedophile.

It’s as if Spacey is rubbing the accusations against him in everyone’s face.

Vanessa Redgrave, accomplished actress and wife of the film’s director Franco Nero, backed out of playing a part in the film upon hearing about Spacey’s casting.

Spacey has powerful friends, including Bill and Hillary Clinton.

One wonders if influential people behind the scenes pulled strings to get Spacey back on the big screen.

Spacey is still incredibly radioactive in Hollywood, but he’s betting that performing in the film will get audiences comfortable with seeing him on the screen again.

That’s a tall hurdle to clear because of the disturbing allegations against him, and the fact that the current Hollywood culture is not conducive to Spacey making a realistic comeback.

Cast members for “Saturday Night Live” were told that they didn’t have to appear in sketches alongside tech billionaire Elon Musk because of his counter-narrative political stances.

It’s hard to imagine “woke” actors working with a colleague who’s been accused of sexual misconduct twenty times over.

If the Hollywood community accepts Spacey back into the fold, it better not ever lecture the rest of America on issues of morality.